One of the greatest and iconic cars to come out of the United States is the Ford Mustang. It’s a car that first got built back in 1964 and is famous all over the world. The sixth generation of the Ford Mustang, the 2015 model, is already taking the American muscle car world by storm.

Don’t get me wrong; there are plenty of American muscle cars that hold a special place in people’s hearts. But the Ford Mustang is, without a doubt, the top of the list. If you’re thinking of buying some American muscle soon, should you consider a new 2015 Ford Mustang?

Of course, if I just replied “yes” this would be a short blog post indeed! So, today, I will offer you an in-depth review of the new ‘stang and walk you through some of its features and benefits.

As with all good muscle cars, potential owners want to know what’s under the hood before they make any buying decisions. Ford is no stranger to making some powerful motors, and the engine options for the new 2015 Ford Mustang are no exception!

In this sixth generation Ford Mustang, new owners get a choice of three motors to get fitted under the hood. They are as follows: 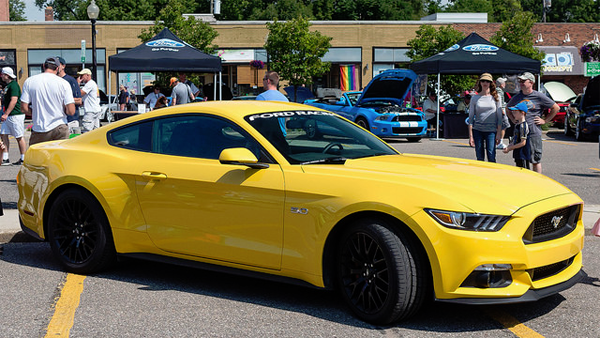 The engine choice might now confuse you. Which is the “best” one to go for? Well, if you love muscle cars with V8 engines, the GT is for you. The EcoBoost offers better performance than the V6 model and will cost you less on gas.

But if you don’t like the idea of driving a “four-pot” you should get a V6 model. The only downside to the V6 is that it’s slower to reach 60 mph from a standing start than the EcoBoost or the V8 GT.

With all three engines, you have a choice of mating them to a 6-speed manual gearbox or a 6-speed SelectShift automatic. With the latter, you can have optional paddle controls fitted at the time of ordering.

Ford also state that real-time performance details get displayed on the dashboard’s LCD screen. It aims to help you become a pro driver on the track. That’s because you can learn more about your car’s torque balance, grip, and acceleration.

Another feature standard on the Mustang GT is a new system called “electronic line-lock.” In a nutshell, it’s another feature designed for use on the track. It locks the front brakes while keeping the rear ones released.

It’s a feature useful for drivers that want to spin their rear tires so that they get warmed up. In most other cars, you would usually have to keep one foot on the gas and the other on the brake pedal to do that. Along with launch control, electronic line-lock is perfect for those that love track-day action!

Thinking of buying an older Ford Mustang from somewhere like www.gkgroup.co.uk for electronic line-lock? I have to point out to you that you won’t find electronic line-lock in older models. Ford claim that it’s an “industry first” in the 2015 Mustang GT.

When you’re spending money on a new Mustang, you want to make sure that the interior is nothing short of perfect. And the 2015 model doesn’t disappoint! For example, the front seats have memory recline capabilities.

The front seats are not only heated, but they are also cooled too! And with six-way power adjustments, comfort and convenience is a top priority in the new Mustang. Sitting up front, you won’t fail to notice the smaller steering wheel.

Ford say this change offers a “better, more controlled feel” and that it can “manually telescope as well as tilt.” That’s great news for taller Mustang drivers. As they would often find legroom at a premium in previous generations.

Other areas to benefit from a revamp include the trunk, which now sports a “flat” floor. That means it’s perfect for loading and unloading cargo with minimal fuss.

A new Mustang wouldn’t be complete without an array of technology! The sixth-generation model comes with adaptive cruise control, rain-sensing wipers and high-definition audio as standard.

The infotainment system syncs well with any smartphone and offers many connectivity options. As you can see, the new 2015 Ford Mustang is just… awesome! 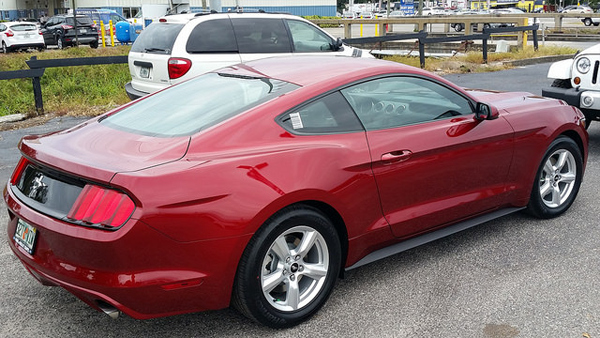