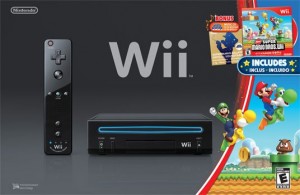 Sponsored by Mommy & Baby Reviews & Giveaways, Powered by Mom and Mom Does Reviews

Do you have a gaming system at home? My son has an xBox, Nintendo DS, and an ipad 2. He actually uses his iPad a lot for educational games, which I love. We aren’t big on gaming because we are normally so busy and outside a lot to even think about having the time for it. But I do have to say the physical play you can get with these gaming systems now is so great! They offer a great way to get kids your kids off the couch and doing some physical activity while they enjoy their favorite games.

Plus you will also receive four (4) Wii Games

Wii Remote Plus and Nunchuk:

The Wii Remote Plus controller is the standard wireless controller that ships with each Wii. It combines the intuitive motion controls of the original Wii Remote with the precision technology of the Wii MotionPlus accessory, all built-in to a single unit. The device is handled in a wand-like fashion, and uses internal gyroscope and accelerometer technology to pinpoint the players movements and physical positioning which it then relates into a game via a sensor bar connected to the console. The Wii Remote Plus has only a few buttons making it easy to use. It also contains a speaker, a rumble feature, and an external connector for other input devices like the Nunchuk controller and the Classic Controller.

A classic Mario adventure that everyone can enjoy. This Side scrolling Platformer for 1-4 players has a game rating of “E” with Comic Mischief. Language is English, Spanish and French. Mario has made a mighty leap out into the galaxy. We’ve also made the leap to full surround orchestration for the music that paints the backdrop to Mario games. Much as a multitude of stars come together to create a galaxy, many musicians have come together to create music to fill your hearts.

Enter to win via the Rafflecopter entry form below. You may need to allow a few moments for it to load. Giveaway ends on June 15th at 11:59 pm EST. Open to Continental US and Canada 18 years of age and older. Good luck!