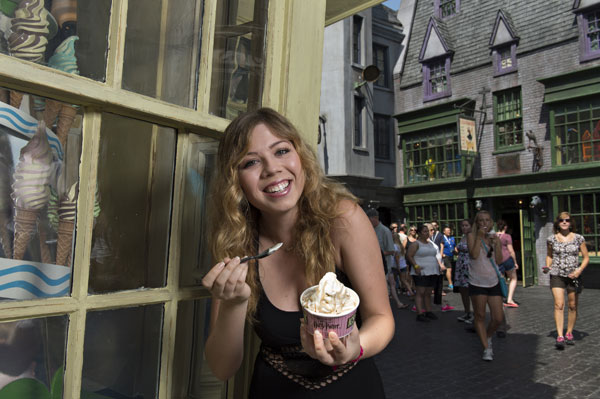 Even celebrities have to take a little time to enjoy theme parks! Last month Jimmy Fallon took The Tonight Show on the road to Universal Orlando Resort. He even rode the Hollywood Rip Ride Rockit with Kevin Hart. If you missed it, it’s a must see in the video below. Kevin is almost too short to ride the frightening roller coaster!

And now Jennette McCurdy stopped by Univeral Orlando Resort! I’m sure if you have kids you recognize her from the hit Nickelodeon TV series iCarly and on its spin-off series Sam & Cat, right? After enjoying some much needed ice-cream at Florean Fortescue’s Ice-Cream Parlour she visited The Wizarding World of Harry Potter – Diagon Alley. She experienced the brand-new attraction Harry Potter, the Escape from Gringotts and enjoyed the rest of her visit at Universal Studios Florida and Islands of Adventure.

The Wizarding World of Harry Potter – Diagon Alley – located at Universal Studios Florida – celebrated its Grand Opening on July 8, 2014 and is home to Diagon Alley and the iconic Gringotts Wizarding Bank, which houses the groundbreaking Harry Potter and the Escape from Gringotts attraction. Guests can now have the journey of a lifetime aboard the Hogwarts Express and experience more of Harry Potter’s adventures.