One of my favorite interviews for Solo: A Star Wars Story was getting to sit down with Academy Award-winning filmmaker Ron Howard. I was so excited to learn that he would be the director for the new Star Wars movie. Besides being one of the most popular directors for this generation, he is also an actor and writer.

Ron had a scheduled breakfast appointment with friend Kathy Kennedy who also happens to be one of the producers of Solo: A Star Wars Story. Ron happened to be in London meeting with other writers for Imagine Entertainment projects so he really didn’t think anything of the meeting with her. When he got there producers Jonathan Kasdan and Lawrence Kasdan were also there with Kathy. About halfway through their conversation they asked if Ron would be interested in directing the new Star Wars movie. Ron was very flattered with the offer but said he couldn’t imagine that he would take over the role as director. They had already made the decision.

Ron was very compelled by the script and how it answered the questions of what young Han Solo’s life experiences had been and how it had pushed him into the iconic figure we all know later on in his life. The script was really satisfying logical but also had twists and turns that were unexpected. Ron knew it had a fantastic cast and thought about taking the job as director for a few days. Ron’s wife, Cheryl, told him he’d disappointed if he didn’t do it and he knew she was almost always right. He decided to take the job.

One of the most challenging parts of taking on Director of the new Star Wars movie was the cast, especially Alden Ehrenreich playing a young Han Solo. Ron new there would be a lot of judgement surrounding him and his performance since he would be compared to Harrison Ford who has always planned Han Solo. Ron said Alden wore the responsibility very well and playing the part of Han Solo meant a lot to Alden.

Ron talked to Harrison about a week before our interview and the world premiere. Harrison really loved what Alden did with the character and respected it a lot. And it was amazing for Ron and the cast to have Harrison surprise them at the interviews like he did. I spoke about this briefly in my interview with Alden but he was surprised more than anyone. 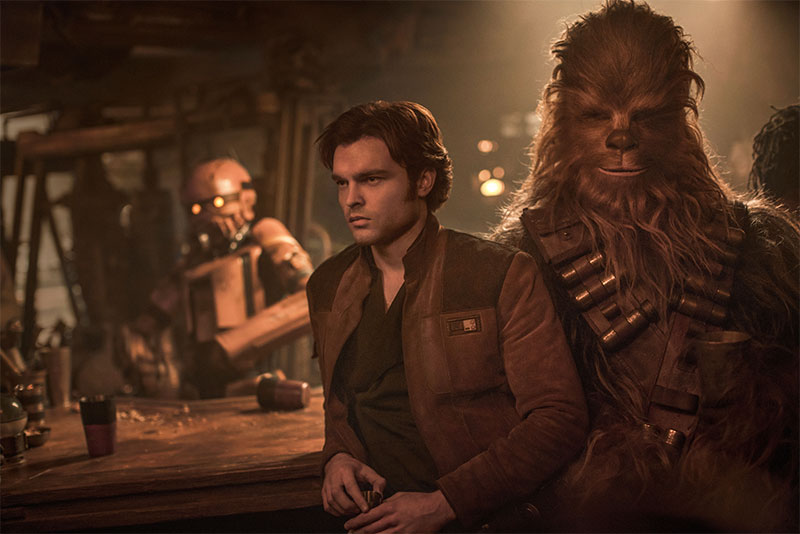 One of the things they did with Geoffrey and Johnny for ‘GENIUS’ was have the two of them spend time together to work out some physical traits and body language. Alden had already thought about this for playing a young Han Solo. They also had Lawrence Kasdan who has written for the iconic Han Solo played by Harrison Ford so many times.

Ron did an amazing job at capturing that Star Wars flare. Ron had to discover the reason that Star Wars movies resonate with everyone and how they entertain us in so many different ways. He had to capture action and sci-fi elements that are very particular to the galaxy. It’s a blend of humanity, humor, drama and deeper, bigger themes that really relate classic themes. It’s like playing three dimensional chess to direct the scenes. When the harmonics are right, it creates a sort of range of ways that the movies entertain you.

It was definitely a real challenge for Ron directing the movie but also a lot of fun. He recognized and respected the movies that came before this one all the more when he realized how complicated directing them could be. George Lucas, Star Wars creator, told Ron to trust his instincts and that he would find himself comfortable in that filmmaking style. George was right.

The cast made it even easier for Ron. They were really creative, cool, young and smart. He really loved working with the Kasdans, the writers, and believed in their story.

Creation of the Young Han Solo

The story of Solo: A Star Wars Story was actually hatched before Disney acquired Lucasfilm in 2012 and they came up with a plan to do more Star Wars movies. Kathy Kennedy and George Lucas actually had a conversation with Lawrence Kasdan wondering what might be interesting for fans beyond the saga movies. Lawrence and George instantly felt and agreed that a young Han Solo movie would be perfect.

It is a story that Lawrence has been wanting to tell for a while. He really believed in a young Han Solo. Everyone involved from the very beginning has wanted to give 110% because it’s so ripe for the telling and a great opportunity for the fans. 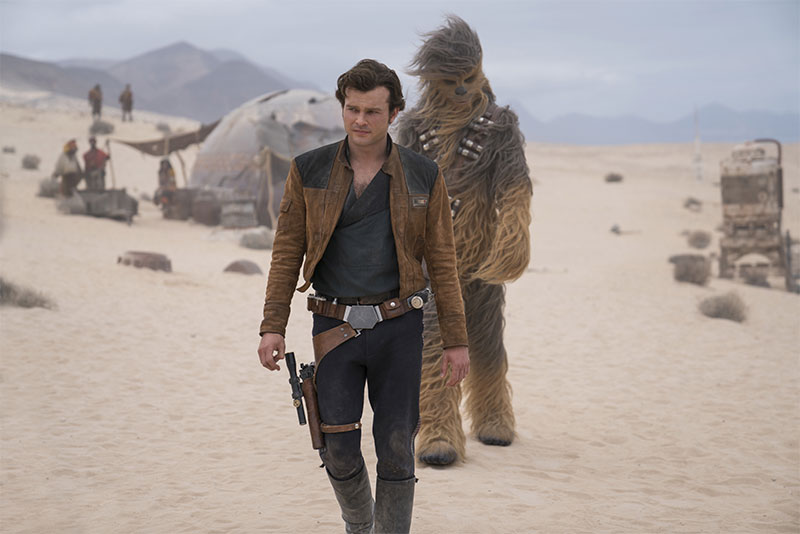 The Howards are definitely a talented family! Ron’s daughter, Bryce Dallas Howard, will be acting in a big movie this summer, Jurassic World: Fallen Kingdom. Even though the two movies will be competing against one another, Ron said it’s hard to not root for his daughter. He said they are in a very fortunate position. It was so unexpected for him to be a part of the summer’s movie lineup. Their movies hit theaters about a month apart this summer but Ron said he really looks at it as a gift. They both work at something they love. Both movies are made for the fans and he hopes we all really like them. It’s their way of life.

I have been a fan of Ron Howard’s for many years. My family, especially my dad, has always loved The Andy Griffith Show that Ron acted in as a child as Opie Taylor. Just for fun I had to get in a quick chat about the show that was so popular years ago. I asked Ron what he thought Opie would think if the Millennium Falcon landed in Mayberry. Ron laughed and said in his best little Opie voice, “Gee Pa, can I take a ride?”

« Emilia Clarke on Her Own LEGO and Being in the New Star Wars Movie
Paul Bettany on Raising His Kids and Being the Villain in Solo: A Star Wars Story »