Being able to attend the Muppets Most Wanted red carpet premiere at the El Capitan Theatre was like a dream! It was so amazing being able to walk the red carpet with celebrities and for a moment feel like you’re walking in their shoes. We walked from our hotel, the Hilton Garden Inn, to Hollywood Boulevard, down the Oscars staircase to the El Capitan Theatre. The excitement is incredible! Fans everywhere. Paparazzi snapping pictures. You feel like a star! We stopped for a moment on the Oscars staircase for photos. That in itself was an amazing experience I will never forget.

A group photo on the Oscar Stairs by El Capitan Theater.

Melanie Kampman on the Oscars Staircase minutes before the red carpet premiere of Muppets Most Wanted.

I also snapped some other great pics along our walk to the red carpet. I spotted the stay puft marshmallow man swaying from a balcony. I mean, who wouldn’t want a picture of him? I also spotted a few stars I recognized on the Hollywood Walk of Fame. Did you realize there are more than 2,500 five-pointed terrazzo and brass stars that are embedded into the sidewalks along 15 blocks of the Hollywood Boulevard? Amazing, right!?! I also couldn’t leave before snapping a pic of the always gorgeous Giselle with her Louis Vuitton.

Finally we were making our way to the red carpet premiere! They had short fences around the red carpet and El Capitan Theater to keep all the screaming fans at bay. Paparazzi were everywhere snapping photographs of all the celebrities. We timed our grand appearance just as Tina Fey was making her way out of her car. She looked absolutely stunning! Perfect walk. Perfect smile. Perfect everything!

Of course, who could have a Muppets red carpet without the awesome Muppets themselves!?! Notice all the great Toyota vehicles the Muppets are cruising down the red carpet in? The 2014 Toyota Highlander served as the Muppets’ vehicle of choice as they arrived in style at the movie premiere. A custom Highlander, specially wrapped in true Muppet fashion, was also featured on the red carpet for photo opportunities. 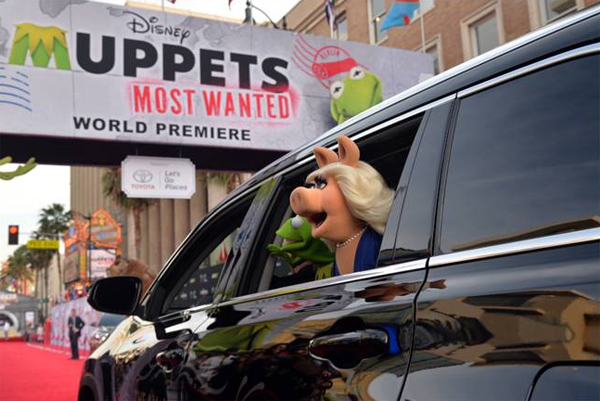 Miss Piggy and Kermit cruising the Red Carpet in a Toyota

Muppets on the Red Carpet

The whole time we were walking down the red carpet security was urging everyone to move along. It is extremely fast paced and you have to stop, take a deep breath and soak it all in before it’s over! It just happens so quickly! There were so many celebrities going in to the theatre with their kids that weren’t even in the movie. I was able to snap a couple of quick photos of the awesome Julie Bowen (Modern Family) with her kids in tow.

Now I’ve got my ticket and ready for the premiere of Muppets Most Wanted!

More on the Muppets Most Wanted movie coming soon! Stay tuned for more great posts on our Disney and ABC press trip! It was amazing!