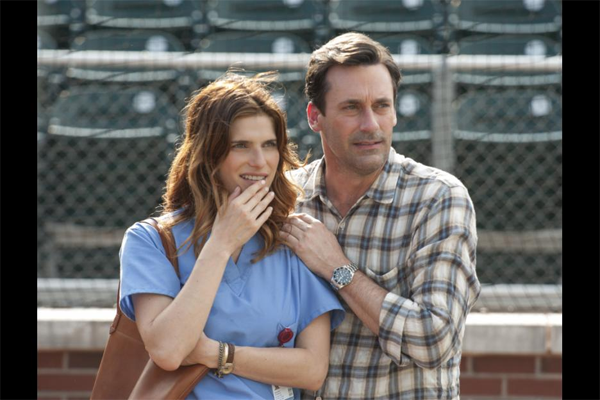 If you are like me, one of the reasons you’re excited to see Million Dollar Arm is because it’s starring Jon Hamm. The moment I seen Don Draper (Jon Hamm) in the first season of Mad Men I was hooked on him! If you are a big Mad Men fan like me, I’m sure you’ve already watched the Season 7 premiere. I loved the scene where Megan picked up Don at the airport. She gets out of her swanky green Austin-Healey convertible in her blue Pucci-inspired minidress and flawlessly walks to great her man. Gasp! I had to rewind it a gazzillion times! If you haven’t seen the Season 7 premiere of Mad Men, shame on you! Whether you are a Jon Hamm fan or not (I’m not sure why you wouldn’t be, but that’s another story), Million Dollar Arm is a must see!

In Walt Disney Pictures’ drama Million Dollar Arm, the fate of JB Bernstein’s career as a sports agent rests with finding an exceptionally gifted young cricket pitcher in India, who can be trained for an American major league baseball team.

Watch the featurette below that also includes an interview with Jon Hamm.

MILLION DOLLAR ARM opens in theaters everywhere on May 16th!