Being able to interview the Muppets Kermit, Miss Piggy and Constantine for their new movie Muppets Most Wanted was one of the most amazing experiences! We had several interviews at The Beverly Hilton Hotel in Beverly Hills. I snapped the picture below on the terrace. It was such a beautiful view and a gorgeous day! It was so great to get away from the snow and freezing cold weather here! I think the whole time we were in LA it was in the 70’s and 80’s! 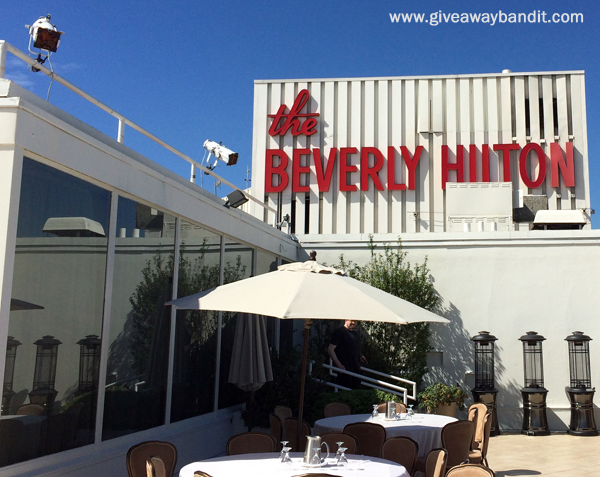 First of all, I love how the Muppets apologized for being carried in by men. They assured us it was the only way for them to get into the room. Of course, Miss Piggy let us know that’s how she makes such a grand entrance. I’m pretty sure Miss Piggy doesn’t mind being carried around by men once in a while!

I can remember watching the Muppets when I was younger. However, Constantine is the new kid on the block and making his debut in Muppet Most Wanted. They all definitely look great for their age. I believe they debuted on television in the 1950’s and have been popular among children and adults since. I’d love to get the name of Miss Piggy’s dermatologist considering she never looks like she’s aged a day in her life. Maybe it’s a pig thing. Maybe it’s a green thing for Kermit. I just don’t know.

One of the most fascinating things to me during the interview is how they all so easily interact among one another. You can tell they’ve been together a lot on filming and touring the world together. They all joke around and have a lot of fun. They are all extremely witty. I wish I could be half as witty as them! Kermit has always been my favorite Muppet but Constantine has quickly won me over. I’m pretty sure it must be the accent considering he’s such a villain.

Can you find me in the Muppets Most Wanted picture below?

The interview immediately started out fun and entertaining. Of course since Constantine is the villain and not exactly on Kermit’s good side, the two were constantly taking innocent digs at one another. Even a few were directed to the gorgeous Miss Piggy. Constantine shortened her name to “Pig” which I’m sure she doesn’t love.

The first question asked was directed toward Constantine and Kermit. Did they wear boxers or briefs? Haha! Constantine quickly spoke up and said he likes to go free and easy. Kermit admitted that he likes to wear boxers every chance he can get but he thinks he looks ridiculous in them. Miss Piggy also sets the record straight on her feud with Joan Rivers. Is it over? If so, who do you think won in the end? Listen to our interview below to find out!

I asked a few questions of my own during the interview. I asked Miss Piggy what her favorite food is and if it might be frog legs. I know, I couldn’t resist! I asked Constantine if he had to workout a lot to be prepared for his fight scene in the film. I also asked Miss Piggy how she stays show fashionable. I really wanted to know how it was working with such an incredible designer like Vivienne Westwood for Miss Piggy’s wedding gown. You’ll have to listen to the video below to find out the answers to all my questions!

I’ve created a YouTube video below of our complete audio interview with Kermit, Miss Piggy and Constantine!

What was your favorite part of the interview?

Check out my Muppets Most Wanted movie review!