I was very excited to learn a Moms of ABC Event would be a part of my press trip to Los Angeles last month. It was an intimate cocktail party on the terrace at the Walt Disney Animation Studios building. The amazing part was that it was just us bloggers and these amazing women. We were able to speak to them one-on-one and get to know each one of them better. Although only some of them are moms in real life, they are ABC moms on their television shows. Not to brag (okay, maybe I am just a little) but here are the amazing ladies I had the opportunity to meet:

Learn more about each of these fabulous women below! Wendi McLendon-Covey of The Goldbergs (@wendimcclendonco)

I am a huge fan of Wendi McLendon-Covey. I loved her Rule of Engagement as the crazy cat lady friend and of course the popular movie Bridesmaids. I was so excited when I heard of the new show The Goldbergs because it starred Wendi and it’s set in the 1980’s. Wendi plays Mom Beverly, who’s a classic “smother,” an overbearing, overprotective matriarch who rules this brood with 100% authority and zero sense of boundaries. She is absolutely amazing in it and wears those ’80’s fashions incredibly! It is a fabulous show for the whole family to enjoy! The Goldbergs airs on Tuesdays, 9:00-9:30pm EST on ABC. Amanda Fuller of Last Man Standing (@amandafuller27) 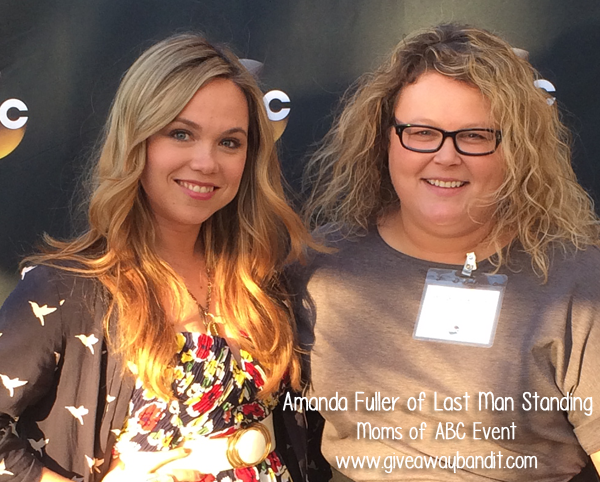 Amanda Fuller was one of my favorite ABC moms to get to know. She was such an amazing lady and seemed to really enjoy our conversation. And she had the most amazing recycled clutch out of juice boxes. So unique! My family and I have always enjoyed watching Last Man Standing, starring Tim Allen, since it first aired. It is now in its third season. Amanda plays Kristin Baxter. Kristin, in addition to wanting to become more independent, has moved into an apartment in downtown Denver with her son and baby-Daddy, Ryan (Jordan Masterson). The 24-year-old single mom no longer toils away at a greasy spoon diner, but is now the manager of an upscale restaurant. Last Man Standing airs Fridays, 8:00 – 8:30pm EST on ABC. Ming-Na Wen of Marvel’s Agents of S.H.I.E.L.D. (@MingNa) 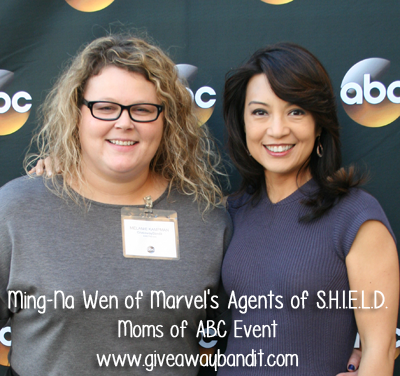 A Marvel theme was definitely in the air while on my press trip in Los Angeles. As you know, I had an awesome screening and press event for Captain America: The Winter Soldier. I also got to meet Ming-Na Wen of Marvel’s Agents of S.H.I.E.L.D., created by Joss Whedon, the creative genius behind the feature film “Marvel’s The Avengers,” one of the highest grossing films of all time. It is a dynamic, action-packed one-hour drama that brings back Agent Phil Coulson (Clark Gregg) to lead a team of highly skilled agents to investigate extra-normal and super human people and events worldwide. Ming- Na Wen plays an agent, expert pilot and martial artist. Marvel’s Agents of S.H.I.E.L.D. Tuesdays, 8:00-9:00pm EST on ABC. Patricia Heaton of The Middle (@PatriciaHeaton)

Patricia Heaton plays Frankie Heck, a middle class mom on The Middle. It is a witty comedy and my family loves watching it every week. She plays mom to three funny yet very different kids in the show. During my trip, I was able to visit the set of The Middle and meet with some of the other cast members. I recently seen Patricia in Mom’s Night Out. It is a must-see family movie! I absolutely loved it and she was amazing in it. I really enjoyed speaking to her about it and how it was playing a preacher’s wife in the movie. The Middle airs Wednesdays, 8:00-8:30pm EST. Frankie Shaw of Mixology (@frankishawisag) and Alexis Carra of Mixology (@alexiscarra) 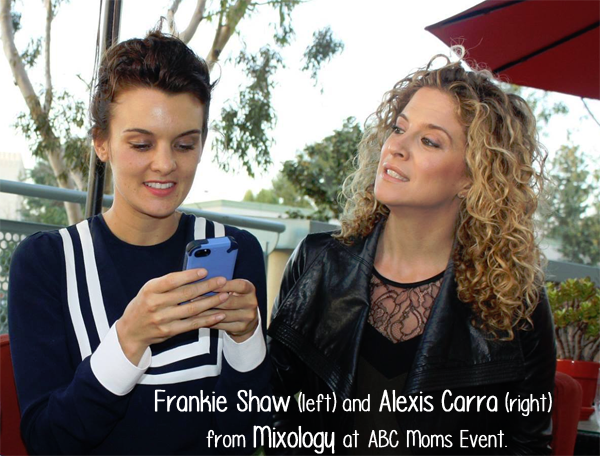 Frankie Shaw on the left and Alexis Carra are both from the new ABC show Mixology. Frankie is a mom to a six-year-old boy in real life and Alexis plays a single mom on the show. Mixology is high-concept comedy from the writers of The Hangover. It chronicles the misadventures of 10 people in search of love. Or sex. But mostly love… errr, sex! Alexis plays an aggressive and sexy single mom Jessica. Frankie plays Jessica’s gorgeous yet catty frenemy Fabienne. I am sure we are all familiar with frenemies! Mixology airs Wednesdays, 9:30pm EST on ABC. Toks Olagundoye of The Neighbors (@ToksOlagundoye) and Jami Gertz of The Neighbors

Toks Olagundoye and Jami Gertz play neighbors on The Neighbors. They were both the absolute sweetest people  to meet! Toks, who plays Jackie Joyner-Kersee, is an alien from the planet Zabvron living in a gated community Hidden Hills, New Jersey. On the show you see them interact with their human neighbors and the wife happens to be Jami who plays Debbie Weaver. It is a very funny show where you get to see how the raise their children differently and deal with marriage despite the fact they are different species. Toks and Jami both play ABC moms. It is a great show for the whole family to enjoy! The Neighbors airs Fridays, 8:30-9:00pm EST on ABC.

Malin Akerman not only acts in Trophy Wife but she is also a producer of the show. I thought that was very interesting to learn! She plays Kate, a reformed party girl and the trophy wife to a slightly older man on the hit show. My family loves watching this show. Malin finds herself as an instant-mom in this show to three children from two of her husband’s ex-wives. You find her juggling being a wife, new mom and her crazy party girl friend Meg (Natalie Morales). It is a great family show! Trophy Wife airs Tuesdays, 9:30-10:00pm EST on ABC. Be sure to follow along with us at #ABCTVEvent.