Join me as I take you on a set tour of one of the best television series, Grey’s Anatomy. During my Los Angeles press trip, we were taken on the Grey’s Anatomy set with Jessica Capshaw (Dr. Arizona Robbins @JessicaCapshaw) as our guide and able to visit with other cast and crew members including Justin Chambers (Dr. Alex Karev), Camilla Luddington (Dr. Jo Wilson @camilluddington), Sarah Drew (Dr. April Kepner @SarahDrewGreys),  props master Angela Whiting (@GreysProps) and costume designer Mimi Melgaard (@MimiMelgaard).

Grey’s Anatomy is a medical drama set at the fictional Grey Sloan Memorial Hospital in Seattle. The doctors deal with life-or-death consequences on a daily basis. They find comfort, friendship and sometimes more in one another. They interns and residents of the hospital try to balance their personal lives with the demands of their medical training. The main character is Meredith Grey (Ellen Pompeo), who is married to a neurosurgeon at the hospital .The show follows her life as a third year resident at the hospital in the surgical department run by Dr Richard Webber (James Pickens Jr.). It covers not only her relationship with her husband, but also with her best friend Cristina Yang (Sandra Oh) and her interactions with the other doctors and staff.

When we first arrived on the Grey’s Anatomy set we were greeted by Jessica Capshaw. We stood in the ER area of the “hospital” where the ambulances drive up on the show. It was so neat to see how the sets are created and come to life before our eyes.

We were able to tour the Grey + Sloan Memorial Hospital where the actors work on set. It’s amazing to see how real the set is and as close to a real-life hospital as possible. To see everything that goes in to these shows is unbelievable how life-like they can make them and how you are drawn in to them through your screen.

We even got to tour Meredith and Derek’s dream house as pictured below.

Jessica Capshaw continued our tour into a large room where they had props and costumes on display. She introduced us to costume designer Mimi Melgaard who was great at answering any questions we had about the scrubs and gorgeous gowns. 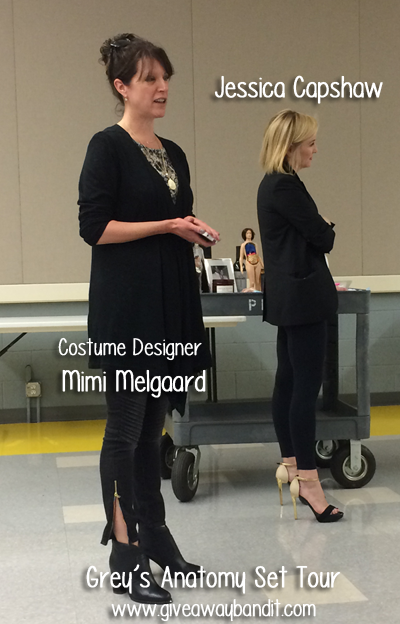 Grey’s Anatomy props master, Angela Whiting, gave us some amazing demonstrations and showed us the props used on set. She showed us the amazing prosthetics and animatronics like the heart below. Isn’t it amazing to see how these come to life on television?

Besides being able to interview and visit with Angela Whiting and Mimi Melgaard, we got the chance to speak with Sarah Drew and Jessica Capshaw. We also had a surprise visit from Justin Chambers and Camilla Luddington… oh my gosh, cutest things ever! We got to learn more about their characters, the show and what’s it like being in one of televisions most popular series. Sarah Drew is super spunky and I absolutely loved her in the upcoming movie Mom’s Night Out.

We were also given a pair of scrubs as a take-home gift signed by the creator of Grey’s Anatomy, Shonda Rhimes! Awesome, right? I am thinking about offering them as a giveaway to my amazing fans! What do you all think?

Be sure to follow along with us at #ABCTVEvent and #GreysAnatomy.