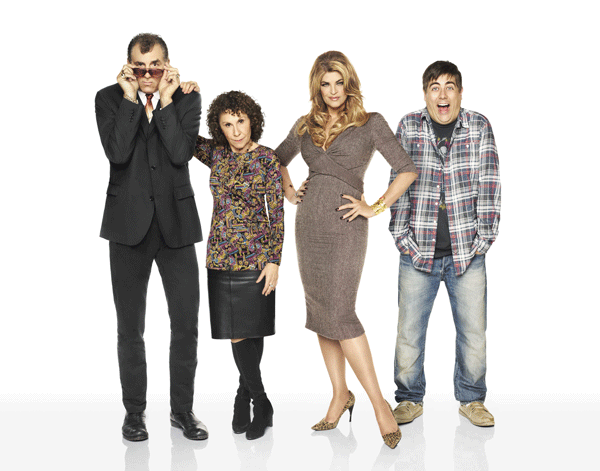 The premiere of TVLand’s new sitcom, Kirstie, is tonight at 10/9 c. I absolutely adore Kirstie Alley. My mom and I have loved watching her for years. She seems like such a fun, tell-it-like-it-is kind of gal which I love.

I was so excited to find out I had been chosen as a Kirstie Super Fan – one of only 50 members selected to be in this exclusive club! Plus, I got a sneak peek at the premiere and let me tell you it is exactly what I had hoped for and more! Kirstie and the rest of the cast is amazing! Check out the awesome swag I received below and then scroll down to learn more about this awesome new show!

New York, NY – February 15, 2013 – Multiple Emmy® Award-winner Kirstie Alley is lighting up the stage on TV Land as the network picks up “Kirstie,” a new sitcom revolving around Alley as Broadway star Madison Banks. The sitcom reunites the actress with longtime friend and former “Cheers” co-star Rhea Perlman and pairs them with famed “Seinfeld” actor Michael Richards, both of whom have won multiple Emmy® Awards as well. “Kirstie” also stars Eric Petersen (“Shrek: The Musical”) and will premiere in Fall 2013 with 12 episodes.

Alley took to Twitter today to announce the series and celebrate the good news (see her video announcement here).
“This cast is a TV Land dream team of stars. Seeing them all together is truly mind-blowing,” said TV Land President Larry W. Jones. “This series pick-up reaffirms our commitment to making broadcast quality original programming for a network whose brand stands for timeless entertainment.”

“We’ve been after Kirstie for two years, and now we found the perfect show for her and the perfect writer in Marco Pennette,” added Keith Cox, Executive Vice President, Development and Original Programming. “We are so excited to give a home to Kirstie and this amazing cast with a show that TV Land fans will love.”

“Kirstie” revolves around Madison “Maddie” Banks, a renowned Broadway star who finds her life turned upside down when Arlo (Petersen), the son she gave up
at birth, suddenly appears hoping to connect after his adoptive parents have died. However, Maddie doesn’t exactly see nerdy and schlubby Arlo fitting in with her luxurious lifestyle. But when Maddie’s assistant and best friend, Thelma (Perlman), and outlandish driver Frank (Richards) encourage her to give Arlo a chance, Maddie is shocked to find that perhaps she has motherly instincts after all.

About TV Land
TV Land is the programming destination featuring the best in entertainment on all platforms for consumers in their 40s and 50s. Consisting of original programming, classic and contemporary television series acquisitions, hit movies and a full-service Web site, TV Land is now seen in over 98 million U.S. homes.
About Viacom
Viacom (NASDAQ: VIA, VIAB) is home to the world’s premier entertainment brands that connect with audiences through compelling content across television, motion picture, online and mobile platforms in more than 160 countries and territories. With approximately 170 media networks reaching more than 600 million global subscribers, Viacom’s leading brands include MTV, VH1, CMT, Logo, BET, CENTRIC, Nickelodeon, Nick Jr., TeenNick, Nicktoons, Nick at Nite, COMEDY CENTRAL, TV Land, Spike TV and Tѓ3s. Paramount Pictures, America’s oldest film studio and creator of many of the most beloved motion pictures, continues today as a major global producer and distributor of filmed entertainment. Viacom operates a large portfolio of branded digital media experiences, including many of the world’s most popular properties for entertainment, community and casual online gaming.
# # #