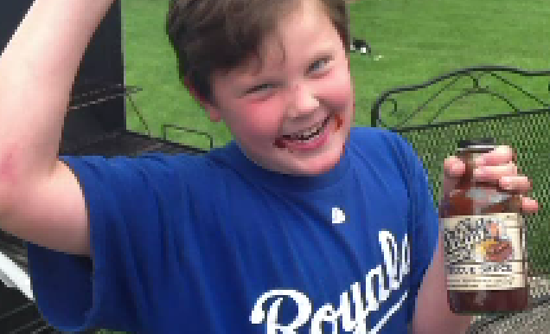 My family has stuck by the KC Royals through the good and bad times. I remember my parents taking us to several games every year when I was little and watching George Brett. It was always so much fun to go to a game. Now I enjoy going with my family and our son, the Bandit. He absolutely loves going to see them play. We have always been Royals fans whether they are winning or losing. What’s going on with the Royals winning streak now? Could it be the new Billy Butler BBQ sauce? Or, as they like to call it their Rally Sauce (#RallySauce)!

Watch the Bandit below and see what he thought of the bbq sauce. Yes, I know, he’s out of character!

Apparently something must be in the sauce because the Royals have been hitting and winning! The first 10,000 bottles of Billy’s Hit-it-a-Ton BBQ Sauce already sold out. According to Billy Butler’s twitter, stores will be restocked later this week.

The #rallysauce will be back on shelves later this week! The first 10,000 bottles already sold out! Order online at http://t.co/uIlwX8ElWV

Billy and Katie Butler started Hit-It-A-Ton as a way to raise food to distribute to the less fortunate in Kansas City. The cost of one ton of food is $250 to obtain and distribute. I’m sure that’s how it got the name Hit-it-a-Ton! You can learn more about it at hititaton.org. So, what did the Bandit think of the sauce? He normally isn’t a fan of any kind of sauce or even ketchup but he actually really liked it a lot. He said it wasn’t spicy like the kind of bbq sauce we normally use. He gives it a thumbs up! 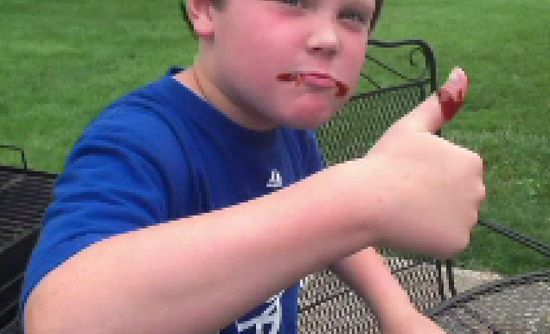 The sauce is available at Hy-Vee, Price Chopper, Rally House and Zarda BBQ in the city. We purchased ours at Hy-Vee in Liberty before it was too late! The Bandit is hoping for a home run at his game tonight and a win from the Royals. We’ll update you and let you know how it went. Maybe Billy Butler himself will even let us give a bottle or two away to the fans… Of course, you’ve got to comment below and let him know you want to try it! Be sure to tweet with our link during games with #RallySauce! Or, retweet our tweet below!

UPDATE: The Bandit did hit a single and double at his game! There must be something in the sauce! Before bed he asked me what we were going to eat the sauce with for lunch tomorrow before his next game. Looks like he’s a believer!

Please Note: Giveaway Bandit is not sponsored nor endorsed by Billy’s Hit-it-a-Ton BBQ Sauce. We simply bought a bottle at our local Hy-Vee store and wanted to share our thoughts with our fans.

To inquire about becoming a sponsor for one of our fun events, sponsor a post, or anything else, please contact Melanie at melanie@giveawaybandit.com for details. Take a look at our Media Kit to see what Giveaway Bandit has to offer.

Giveaway Bandit contains endorsements for products and services, which means when you click on a link that I recommend, I may receive a commission. Not every link is an affiliate link. Giveaway Bandit received one or more of the products mentioned above for free for evaluation purposes and is an affiliate of one or more of the products and banners you will see on this site. Regardless, all opinions expressed are still 100% my own. I am disclosing this in accordance with the Federal Trade Commissions 10 CFR, 255 Guides Concerning the Use of Endorsements and Testimonials In Advertising. Giveaway Bandit Disclosure.