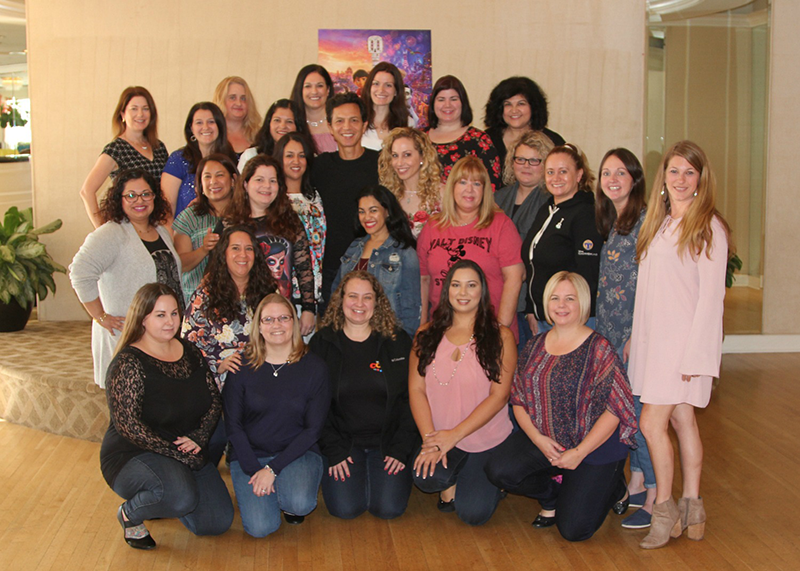 Over the next few weeks I’ll be sharing the incredible interviews I had with the cast and creators of Disney Pixar’s COCO during my COCO red carpet premiere experience. The interviews I get to have with the cast and creators are really unique for them. There’s 25 of us creative bloggers and influencers sitting at a large table. Whoever we interview gets a standing ovation as they enter the room. It really sets the tone for an interview that’s different with other news and media. As Benjamin Bratt said, “what a warm and beautiful greeting.” 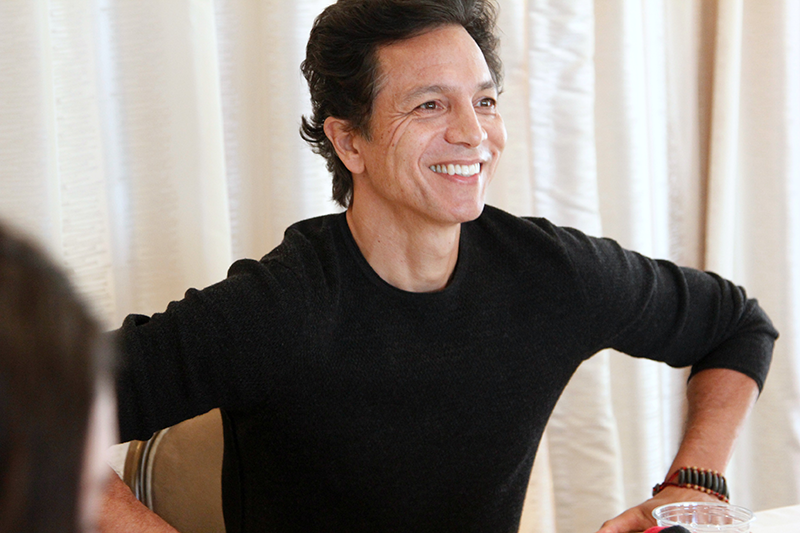 Today I’ll start with the talented Benjamin Bratt, the voice of Ernesto de la Cruz in COCO. I don’t want to give away an spoilers but I can say that Ernesto de la Cruz is a musical God to the Land of the Living, Land of the Dead and Miguel. Benjamin’s voice is outstanding in the movie. Miguel aspires to be just like Ernesto one day.

Benjamin immediately started by gushing over the premiere we all attended the night before. The energy at the premiere was unbelievable. He said that was probably the most spectacular, heartwarming, fun premiere he had ever been to. It definitely is at the top of my list for premiere parties! Where else can you be greeted by a mariachi band and dancers. It was a celebration from start to finish. 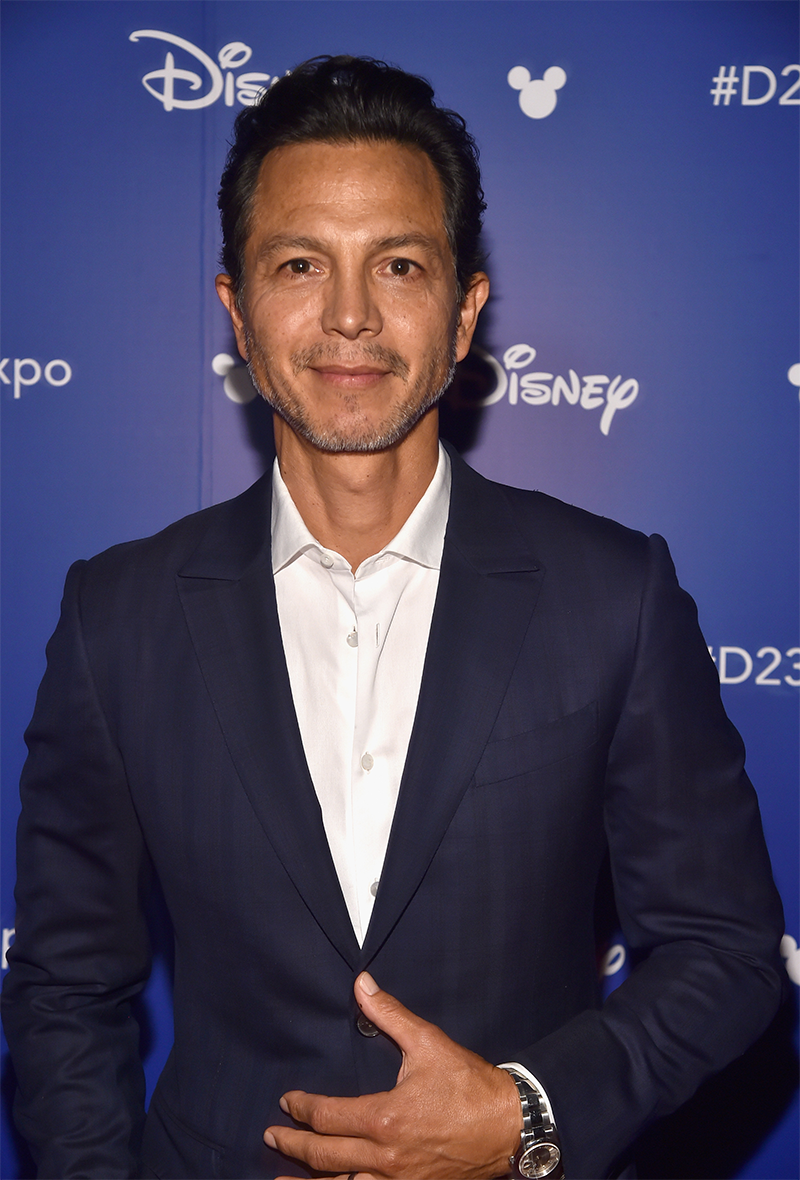 Benjamin actually hadn’t seen the film in its completed form until the premiere the night before. He said he was most struck by the beauty of the artistry. It’s such a beautiful film to look at. When you add the technical expertise to the emotional depth of the film and what it delivers at the end, there’s no other word for it, and powerful.  It was a really powerful result.

Speaking of emotional, you’ll definitely want to bring your tissues to COCO. While it is a celebration, there are many emotional aspects to it as well. As Benjamin says, there’s a handful of moments that will make you cry. Of course, one of the most emotional scenes is with Ernesto de la Cruz and Chicharrón (Edward James Olmos) but I’m not going to give out any spoilers for that scene. Be sure to stay tuned for our interview with Edward James Olmos. Edward was such a wonderful guy to interview!

The film punches you right in the heart because you realize we all need to stay connected to where we come from, to remember our ancestors. You can feel this with the song that Gael García Bernal (Héctor) delivers in the film. It’s raw, simple, emotional and truly moving.

COCO is finally an opportunity on a global scale to illuminate the beauty of the Latino culture. Benjamin said when he was first given a tour of the Pixar Studios he was shown a room that, from floor to ceiling on every wall was covered in Mexican iconography, Day of the Dead colors and images. Some of the characters were drawn and illustrated that they were going to portray in the film. Benjamin realized that a portrayal of Latino culture had not yet been done on this kind of scale. 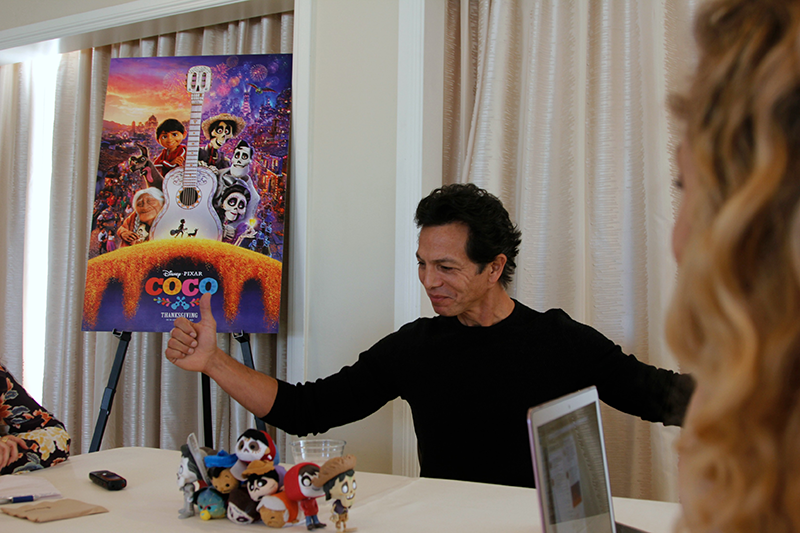 At the end of the day, for all the uniqueness that we have, and there’s a lot that’s vibrant and authentic and beautiful about Latino culture, we all at the end of the day are more alike than we are different and this need or sense of wanting to belong to something, to recognize where you come from, to stay connected to the people that paved a path for you before you got here. It really was quite emotional for Benjamin. 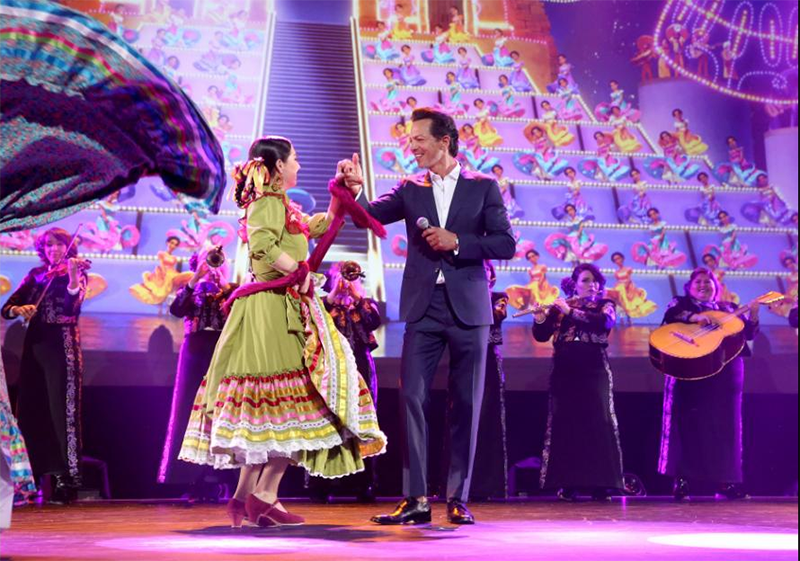 The film is not only about seizing the moment but about remembering and celebrating our loved ones. What would you want to be remembered by? Benjamin said that he would hope to be remembered for his kindness, generosity and the love that lives in his heart for people that he holds near and dear. He would also like to be remembered as someone who tried to live his life with integrity and that he was a fun guy. These are definitely things I think of about Benjamin from the interview. He was very smart, kind and funny.

Death as a Celebration

The story of the film views death as a celebration and a continuation of what we are and who we are. It’s not to be feared but something to realize that it’s part of the natural cycle of life and that you can in fact stay connected to the people that you love. Benjamin said as his mother gets older they realize they can stay connected through prayer, memory, acknowledgment, and ofrendas. Ofrendas are an essential part of the Day of the Dead celebrations. The word ofrenda means offering in Spanish.

The film is about death and can be a great way for children to better understand. Benjamin hopes that children will see the film as a reminder of what already exists. It’s just the next step in this cycle of life. 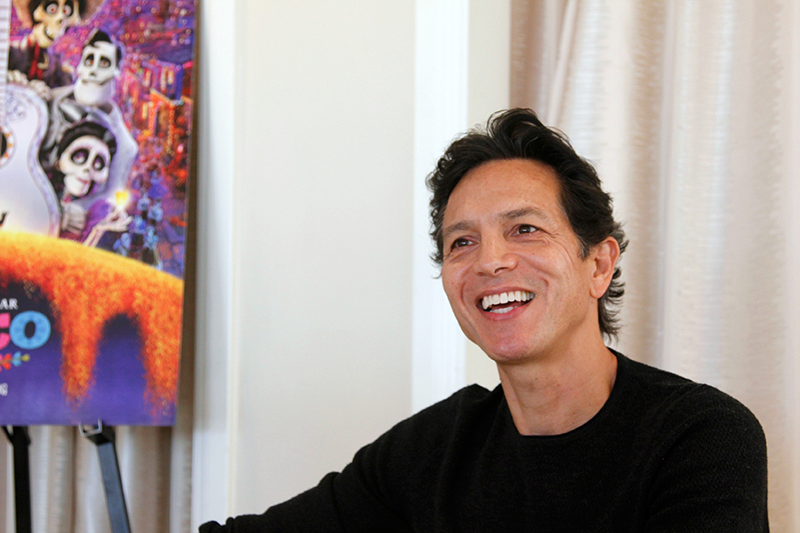 The most important thing in Benjamin’s life is his family, relationship with his wife and his two children, a daughter Sophia and son Matteo. They take precedence over all else, event at work. He’s a husband and father first. With that kind of clarity you can take on any challenge that’s presented to you. With that being said, he does like to seize the moment but with more caution than when he was younger before starting a family of his own. 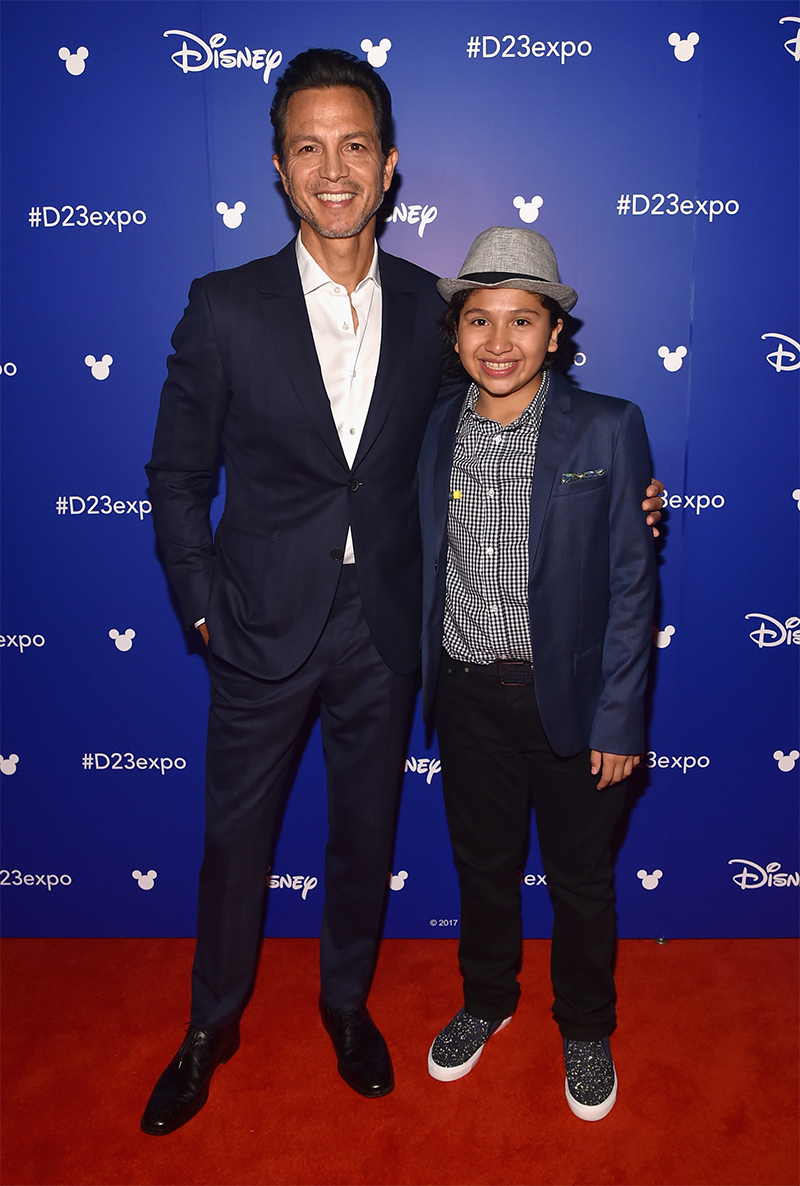 Benjamin has an incredible voice in the film as the most famous singer and musician in Mexican history. He said that he acknowledges that he’s a good actor but he always wanted to be a singer. He always has admired singers and musicians because with singing, your voice is your instrument. Singing translates across all language, all cultures because a beautiful voice is a beautiful voice. 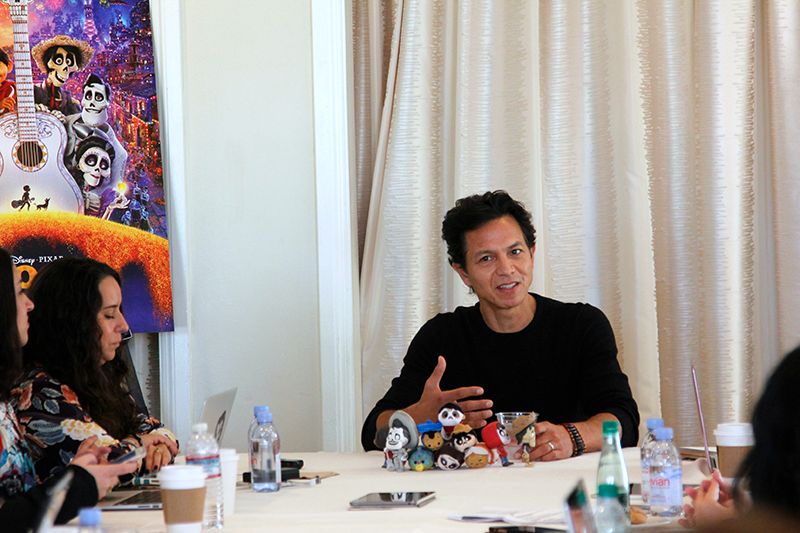 Benjamin always wanted to be a balladeer like his good friend Marc Anthony. He admires how powerful of a voice he has. Having said that, he thought it was a bit ironic to get the part of Ernesto de la Cruz. Benjamin had several sessions with Liz Caplan, a vocal instructor to the stars in New York, who helped him immensely. Benjamin is very proud that he recorded every song Ernesto sang in the movie. 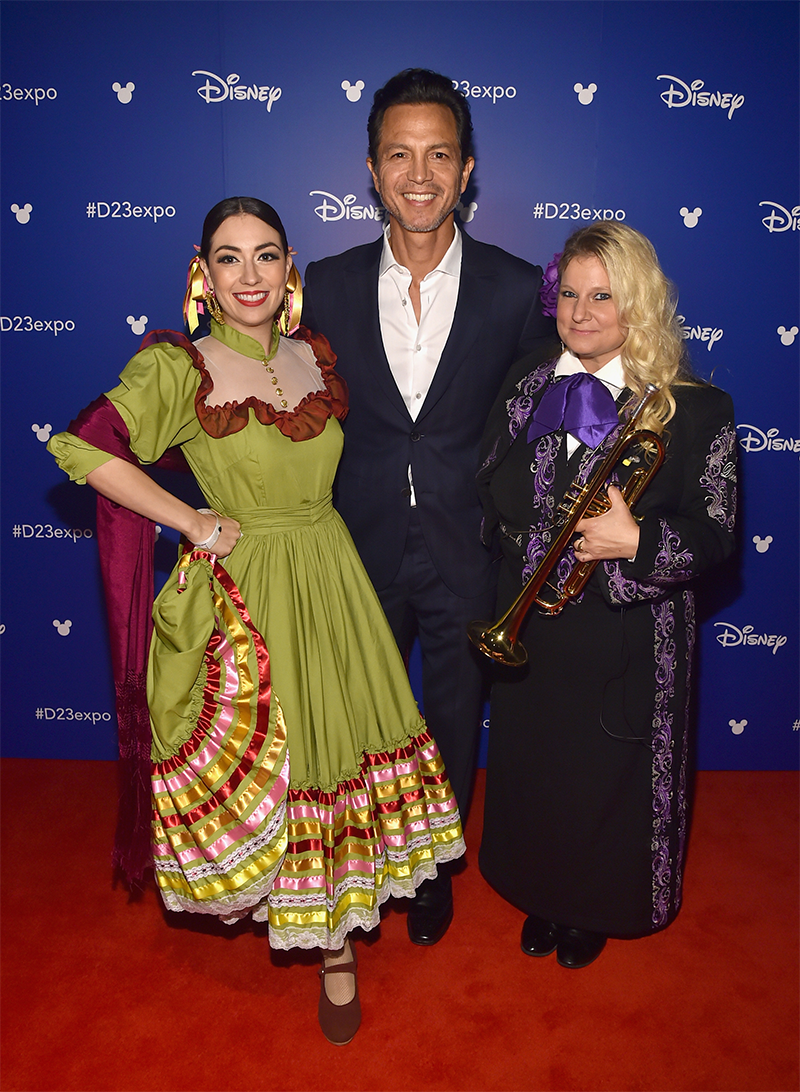 Check out the trailer for COCO below:

Fun for you and your kids: Disney Pixar’s Coco Printable Coloring Pages and Activity Sheets

Don’t forget! Olaf’s Frozen Adventure will be shown for a limited time in theaters before COCO!

Stay tuned over the next few weeks as I introduce you to the cast and creators of COCO!

Disney Pixar’s COCO is in theaters everywhere November 22, 2017! The perfect movie to take your family to Thanksgiving!