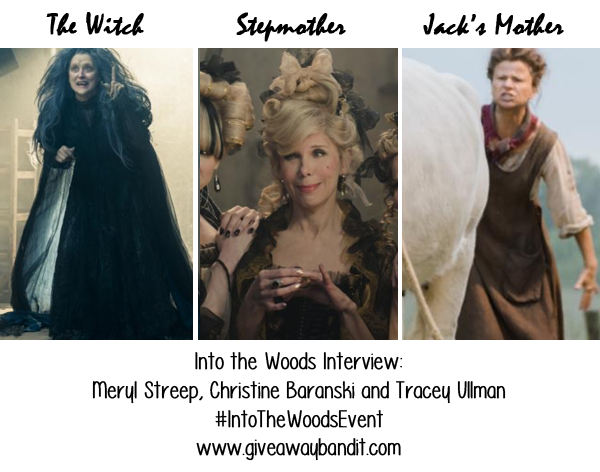 Last week during my Disney press trip I had a once-in-a-lifetime opportunity, along with 24 other bloggers, to interview Meryl Streep, Christine Baranski and Tracey Ullman at the amazing Montage Hotel. It was amazing to say the least! Of course, they were chatting with us about their Golden Globe nominated movie, Into the Woods. They shared stories about their great friendship.

All 25 of us bloggers sat at a long table with Meryl (the witch), Tracey (Jack’s mother) and Christine (the stepmother) at one end. It’s nothing like what you might imagine… a press day with questions being slammed at them and cameras shoved in their face. It’s a relaxing environment for them and we enjoy a conversation about their life and roles in the movie. We clapped for them as they came into the room. The look on Christine Baranksi’s face was priceless! 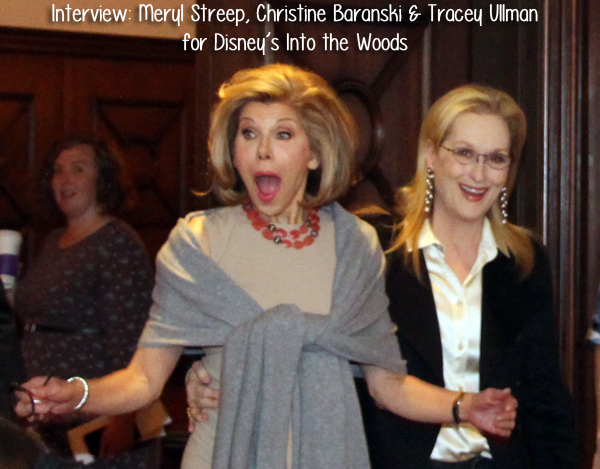 Tracey and Meryl have been old friends since they starred together in the 1985 movie Plenty. “I thought I’d just met my new best friend,” said Meryl Streep. Tracey was a pop star in England back in the day and a guest VJ on MTV… when MTV actually played videos! Tracey was actually discovered by her mate, as she calls him, Paul McCartney. Tracey and Meryl even recalled flying together in a plane when the engine went out thinking they were going to die. Thankfully they made it through and ended up having kids the same age. 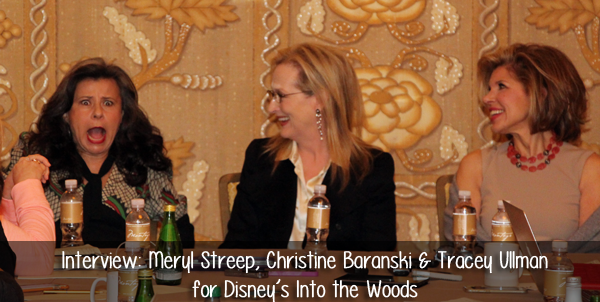 Christine and Meryl worked together on Mama Mia! (2008)… or as they like to call it, research. Christine recalled them doing research for the film when they were actually just hanging out all the time. “We were dynamos in Greece together, on Mama Mia!,” said Christine Baranski speaking of her and Meryl’s relationship. Meryl chimed in and let us know her and Chrstine had known each other a hundred years…

Christine and Meryl both live in Connecticut where they raise their children. Christine says, “The real achievement is being an actress, wife and mother, and having that longevity. That’s a real achievement, in my opinion.  That’s the greatest achievement, not just in career, but holding your life together, and look at Meryl, with four kids.”

We asked the ladies for any advice they have for raising kids these days and how they survive. Meryl said it’s harder and harder to keep the world out. Raising little kids is so different from when their children were little. Meryl says, “To keep them in the little tower’s impossible. People worried about this film, that it maybe is too dark for kids. Kids know so much now. They’re aware of so much, and yet they’re so resilient, and innately hopeful. That’s what the film is.” 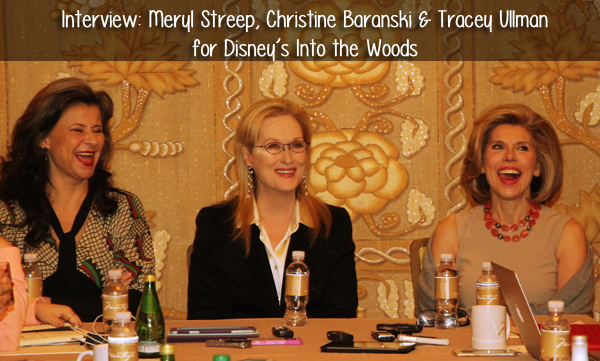 If their children were still little would they take them to see the movie or is it too dark? According to Meryl, Tracey let her kids watch Cops. Oh my gosh, we laughed so hard when she said that! The ladies agreed they would have most likely taken their kids to see Into the Woods at age seven or eight.

Tracey discuss the Grimm’s Fairy Tales and how we portray them as they are written. The fairy tales were much more frightening when they were kids. They were for children to be scared of. Fairy tales have gotten sanitized over the last 20 years.

When discussing how fairy tales have changed over the years, Christine shared with us that she told her kids, “You’re safe. If you’re in the world of the imagination, you can go anywhere, and you all come back from that, so you’re safe.” Christine shared a story about how one day she literally hauled their television set off when she seen her daughter had turned it to a daytime television show that had strippers on. Her and her husband actually raised their kids without a television set. The ladies laughed when Meryl said, “Even though you’ve made your living in television?” She does raise a good point! haha!

We asked the three ladies what roles they enjoy playing the most. I loved that Meryl said they each deserve their own voice and place in the world with so many different stories. Tracey recalled the time Meryl played Margaret Thatcher in The Iron Lady (2011). Meryl’s response, “Well, I was just interested in an old lady.  I like old ladies.” We all started laughing. 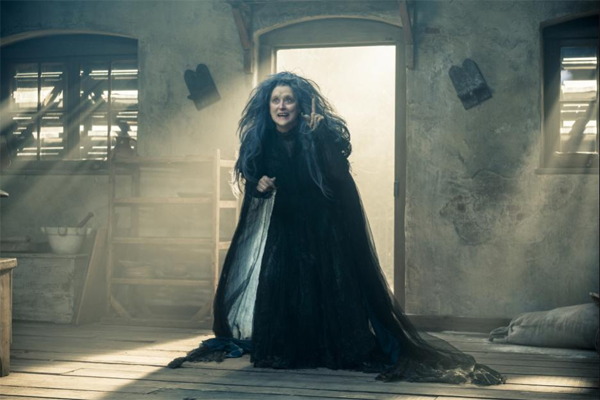 Meryl’s character, the Witch, was played on Broadway by Bernadette Peters. She said she might have stolen more from her character if she could only remember. Rob Marshall (director) made Meryl feel free with her character. Stephen Sondheim, who wrote the music and lyrics for Into the Woods, let them do what they want. Meryl said he wrote a song for Into the Woods for her character that isn’t in the film but will be in the DVD extras. Meryl said she had a private session with Sondheim where he even gave her the sheet music at the end. He even gave her the sheet music at the end. She was so excited about it that she asked him to sign it. Sondheim’s response, “Don’t fuck it up!” Meryl followed with, “Don’t put that in the mommy blog!” We all laughed!

We enjoyed learning about what the ladies thought about their costumes, designed by Colleen Atwood. Christine said her blonde wig was originally really big to make her and her stepdaughters appear to have a truly over-the-top, larger-than-life, trying-too-hard kind of family.

Tracey said her costume reminded her of a sort of Dries van Noten peasant look. She said she loved her roll around in the leaves look.

Also in the room was Oscar Award winning make-up artist J. Roy Helland. Christine pointed him out as he sat in a chair toward the back of the room. He created Meryl’s extraordinary look for the day. He has done the hair and make-up for Meryl Streep in all of her movies since Sophie’s Choice in 1982.

At the end of our interview we were able to capture a photo with the three lovely friends. Something I will never forget is how Meryl Streep took the time to shake each one of our hands before she walked away. They are all truly amazing women in real-life and incredible on the big screen.

Be sure to watch this funny trio on Christmas Day in Disney’s Into the Woods!

Be sure to check out our other great interviews for Into the Woods: 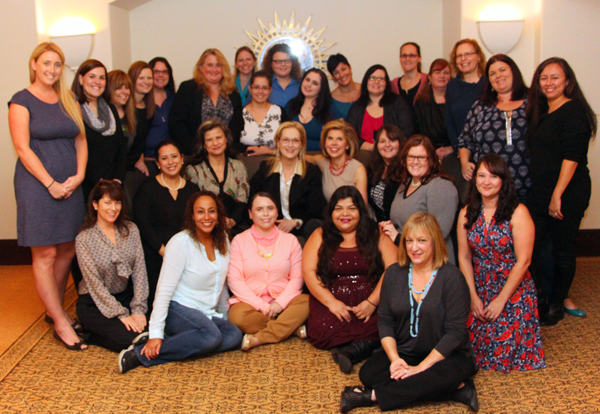