Getting to interview Scarlett Johansson for Captain America: The Winter Soldier was an amazing opportunity. If you didn’t know, she plays the gorgeous Black Widow. Yes, she is as beautiful in real-life and super sweet! Scarlett made her acting debut in the comedy film North in 1994. She has had a successful acting career since the very beginning! She has been nominated for and won numerous awards. Besides the Captain America films, you’ll recognize her from The Avengers, Iron Man 2 and many more. 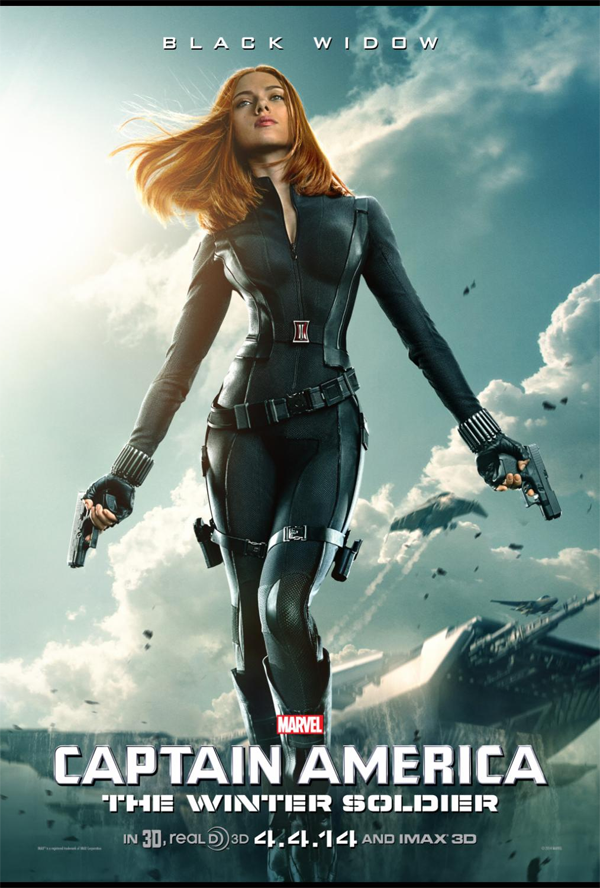 Scarlett says Black Widow uses her brain, wit and feminine wiles to get the job done. Black Widow is a very playful character that has a really compelling story. Because she has a kind of a gray, moral code. She’s not black and white. Let’s see what else we can find out about the beautifully brilliant Black Widow and Scarlett in our interview below.

Q: When are we going to see a Black Widow movie?

The thing about working with Marvel that I appreciate certainly and fans appreciate is how big- how loud the audience voice is and resounds in their ears. I think because Marvel, and particularly Kevin Feige is such a fan of the source material himself and understands that the fans are what drive this train. If people want that, I’m sure that we can get something together.

I would love to have the challenge of doing a female superhero movie where the protagonist didn’t rest on her feminine wiles. Such as using every opportunity to strike a sexy pose in order to get the job done.

I think it could be really a fun, fun opportunity to have. So, we’ll see. If you request it, they will come. How would that work?

I am not sure about everyone else, but I’m definitely hoping to see a Black Widow movie especially after seeing her in Captain America: The Winter Soldier. 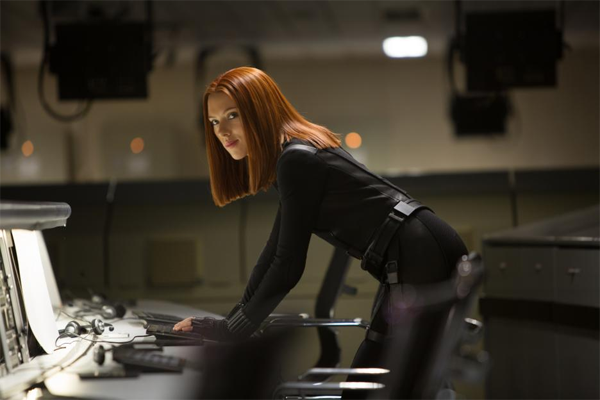 Q: In this film Black Widow is like cupid? Why the transition?

That’s interesting. Well first of all when the character is talking to Loki, she’s kind of putting up this front, obviously. She’s not, as we come to realize, is not being completely honest with him. It’s partly for her widow face that she wears. In this film we really get to see a lot more of Natasha. I like to think that Natasha has a romantic side.

She’s been really damaged. I think that she very early on in the past probably learned to not care too much about people because they could be easily taken away from her and used against her. She probably didn’t want to hurt the people that she loved the most. So she never needs them or never invested too much in them knowing that it would probably put them in danger. I think that she hopes that for someone like Captain America, you know particularly Steve.

I think she sees someone who could have his life enriched by sharing it with somebody. That she sees someone that kind of yearns for that, but is also scarred by the series of events that have changed his life. And maybe she sees in Steve a little bit of herself and wants something more for him. 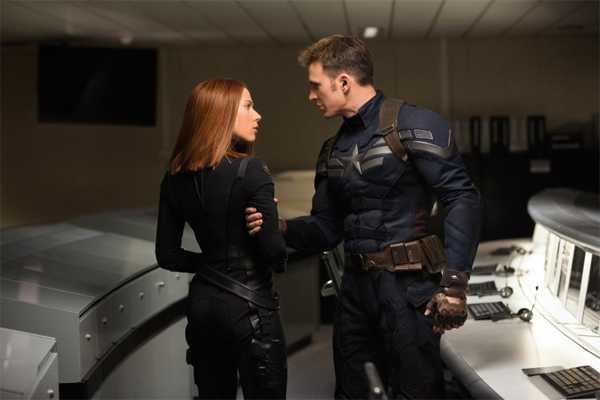 Q: Do you enjoy having your character mature?

Of course when I went in to do Avengers after having done Iron Man 2 which, you kind of don’t know a lot about the character, right, you sort of see her in widow mode. I didn’t know if the character would work, or the audience would like her. Like my version of her.

Once it became clear they did and I got the opportunity to explore more of her back story in Avengers,  it really started to carve out what my version of Natasha, what my reality could be. Because I mean obviously it’s one of the oldest female superheroes. Probably the oldest one, and she’s got this vast library of source material and has had many incarnations and many different people have their hand in her stories.

She’s made all kinds of connections and love interests and failures, and she’s been good and bad in everything. We wanted to make sure that the story felt contemporary, obviously. I wouldn’t have a cold war kind of back story, did it make sense, and we had to tailor it to my agent, like what my experience would be. It’s been great to be able to reveal little pieces of that. I think it’s kind of like these little Easter eggs for the fans.

I’ll wink at the audience when you kind of learn a little bit about her past or whatever kind of task she’s been, she’s set on. You kind of discover her as, as I discover her as well. And it’s fun to do that. 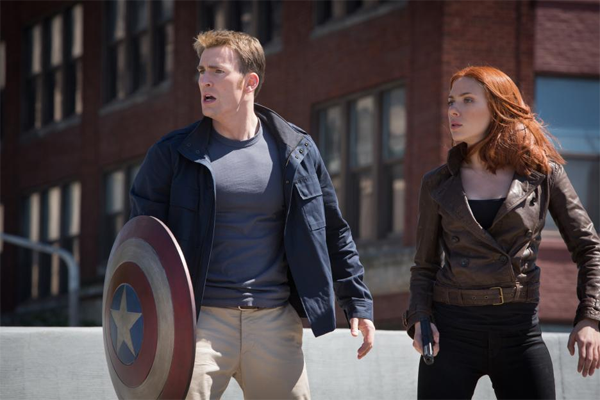 Q: Can you tell us about the stunts you did?

Well first of all, my stunt girlfriend… is this wonderful, wonderful stunt woman by the name of Heidi Moneymaker – that’s her real name. And, yeah, she’s awesome. That’s awesome. She’s awesome. She’s played the widow every time along with me. So we have really worked together from the beginning to develop this fighting style that you see. We want to keep the consistency of it, it’s such a fun, playful kind of fighting style.

It’s badass but it’s kind of sexy. It’s a little bit like flirtatious, I guess, the style. And it’s balletic giving a kind of a little, a nod to her past gymnastics. That’s a bit of a nod to Heidi’s past, kind of quality to it. And of course the Muay Thai and whatever else she would have learned with her kind of global experience. And in Iron Man, the fight sequences were really pretty fantastic.

A lot of kind of gimmicky things that were just really fun to watch. In Avengers, of course, the weaponry, there was a lot more kind of gun play and stuff like that. And wielding all kinds of crazy alien guns, and that was a mess. Wushu or whatever. It was just- can’t tell you how painful that is. But this time around, a lot of the fighting was pretty gritty. A lot of it is kind of handheld weapons, like full on kind of fighting mono-y… Not mono.

It actually made it a lot easier for me because all the crazy acrobatic stuff that you see I start and finish, and then Heidi does ridiculous things with her body that I could never do. Even if it was my job. She’s amazing. And deserves all- a lot, most, most of the credit. A very brave and very inspiring person. I just basically wound myself trying to emulate whatever she does.

Hopefully they can use as much of my face as possible. I want to be as involved as I can. The stunt guys let me do it ‘cause they’re nuts. There’s a big insurance policy on the film. 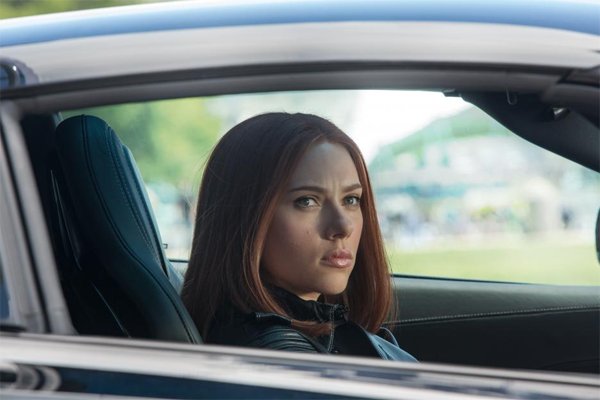 Q: Can you tell us about the Black Widow costume?

The Widow costume is probably the most comfortable of the superhero suits because it doesn’t require a built-in air conditioning unit, like Hemsworth does. I don’t have under armor or any of that kind of, I don’t have a huge leather cape, headdress, whatever, all that stuff. It’s pretty straight forward. It’s kinda like a wet suit actually. Sort of this one piece. I’m always amazed when it goes on and zips up. I’m like, wow. It’s on.

It’s totally empowering because you get the belt and the gloves and the bracelets and your guns and the boots and it looks great. It’s badass! When I have my legs wrapped around some giant stunt guy’s head or whatever, and feeling totally ridiculous hanging on for dear life, it, it sells it.

Totally sells things that would otherwise look absolutely absurd. It adds role, kind of superhero, superhero thing. It changes the way you stand. It changes your posture. You’re more aware of your body. I think when you walk on the set everybody’s like, yeah, it’s the Widow, you know. Looks good. I’ve grown to love it, you know. First I, I was terrified of it. Now I embrace it because it embraces me, actually.

I work hard to get into it and I’m proud to wear it. It’s fun. And kids love it which is great because it looks very superhero-esque and my friends. Kids that are girls, they love the way that it looks. It’s kind of utilitarian but it’s got the feminine thing going to it. It’s fun for them to have that to put on as opposed to like the tiny little skirt. A little cover-up with a tutu, stuff like that.

Meet the Black Widow below. She is amazing!

Be sure to watch for our other great Captain America interviews and review of the movie coming this week!