The Man Behind the Music for the Muppets Songwriter Bret McKenzie

Who’s the man behind the music for the Muppets? Oscar winning songwriter Bret McKenzie! I have said every interview I had during my press trip to Los Angeles was amazing but my interview Bret McKenzie really stood out for me. I could see just how passionate he was about his music and the songs he had written for Muppets Most Wanted. Honestly, I think I was in awe of him the whole time he spoke… 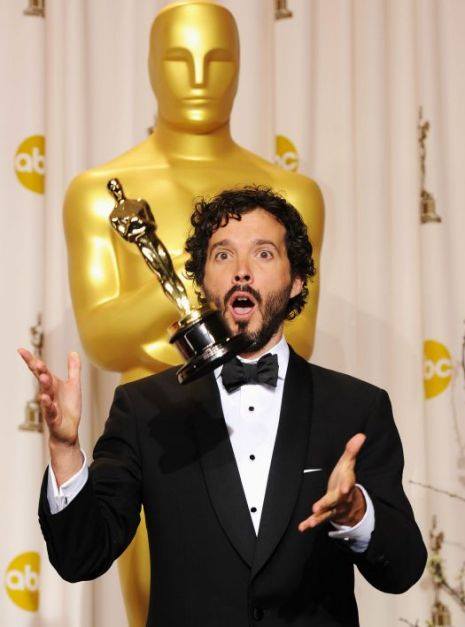 Bret McKenzie’s ‘Man or Muppet’ won an Oscar for best song in 2012. We wanted to know if there was any pressure to meet that kind of standard again when working on the music for Muppets Most Wanted. “Yeah there was a lot of pressure because of the Oscar but really what could I do? There’s always gonna be downhill. I was appreciative but then I had to get on with the job and just, you know, forget about that. ‘Cause I didn’t work on the last Muppet film to win awards, you know.” said McKenzie. This was one of my favorite responses. Obviously he was very appreciative of the Oscar but he writes songs because this is what he loves and he’s not writing them for an award. I loved his response!

McKenzie said it was really fun working on the Muppet films. James Bobin and Nick Stoller sent him the script and had the original idea for the ‘We’re doing a sequel’ song so he started looking through the history of bad sequels and qualities of sequels and there’s so many. “There was one lyric, the–– the first song, the first lyric in the song, um, [SINGS] ‘We’re doing a sequel, that’s what we do in Hollywood, but everybody knows that the sequel’s never quite as good,’ that like a great start to the movie ’cause it lets the audience know that first of all it’s a sequel and then we–– we know that it’s possibly not as good as the last one. ” said McKenzie. It’s a very funny start for the movie for sure! Check out the video for the song below. It also has some great clips from the movie.

McKenzie went on to say about the song, “And it’s, like that’s the way they wanted it ’cause audience can’t but help go, ‘Oh is this gonna be better than the last one? Let’s see what they do.’ So we kinda let them in on that. And that’s what I love about the Muppets is they can do that. The Muppets can turn to the audience and look straight at camera and talk to them about how they’re making a movie.”

I was very interested to learn if McKenzie got any inspiration from the Flight of the Conchords for his songs in the Muppets movie. It was a big influence on him because in some ways it’s the same sort of thing, writing comedy songs and the same techniques. 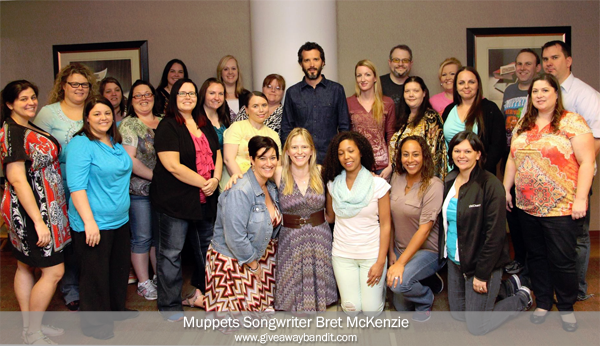 McKenzie went on to tell us about the creative process to writing the lyrics and music. He said him a script with the idea of a song but it’s usually quite a loose idea. He really wanted to try and get a singer to help Miss Piggy with her ballad because Piggy can be not a great singer. McKenzie said he was very excited when Celine Dion agreed to sing the ballad with her. McKenzie laughed, “I’m hoping that these two divas get like a Las Vegas Celine Dion/Piggy, uh, Diva Night, um, that’s–– that’s my dream.” Now that would be more a fun show in Vegas!

After the Oscar winner McKenzie has written a song for the Muppets he goes to James Bobin to play to him and then to the Disney offices to play for the ‘Hollywood suits’. He said he eve has many of the impressions down for the Muppet characters and will sing the songs like them when he plays. It the song isn’t working for the character he can easily change it since he is the songwriter and producer of the songs. For Tina Fey, who plays the role of the prison guard, he was able to adjust the song to suit her voice. McKenzie also said, “And Ricky Gervais, of course, some of you might know he was a–– a sort of failed pop star in the ’80s – – so he’s actually a really good singer. So it was handy.”

When asked if McKenzie had a favorite song he said he thinks the opening’s pretty fun  with ‘We’re doing a sequel’ and gets the movie off on a great note. He also admitted to loving ‘I’ll Get You What You Want (Cockatoo in Malibu)’ which is the bad frog, Constantine, trying to woo Miss Piggy. I’ll admit, it’s my favorite song. My son and I listen to it over and over! The video below is awesome because it also includes McKenzie in it. Obviously, he is not in the movie and Constantine is in his place but it is great seeing him in the video with Piggy. I’ll be surprised if you don’t hit repeat!

When asked what he listens to, McKenzie said he listens to a lot of Harry Nelson and a great album of his is The Point, an animated TV show that he did all the music for, all the songs. He said laughing, “I think I downloaded the Beyonce album by accident. Um, I’ve been running to that. Not too bad, it’s a bit sexual for running. You’re like, even when she’s drunk in love and I’m like, Oh yeah I’m just trying to run another 10 minutes.” There is also a great indie New Zealand band called Phoenix Foundation, which lots of McKenzie’s friends are in that he really likes.

When McKenzie gets writer’s block he said he goes to YouTube for inspiration. He’s a real sucker for power ballads and enjoys going through old ’70s and ’80s songs. He loves Irving Berlin songbooks, old kinda Broadway show tunes are great influence for inspiration.

The perfect ending to the interview. I just couldn’t resist and asked  him if he would care to sing a little bit of the song ‘I’ll Get You What You Want’. LOVED. IT.

The soundtrack for this movie is amazing! My son listens to ours all the time. I high suggest buying the Muppets Most Wanted soundtrack! I guarantee you will have it on repeat all day long!