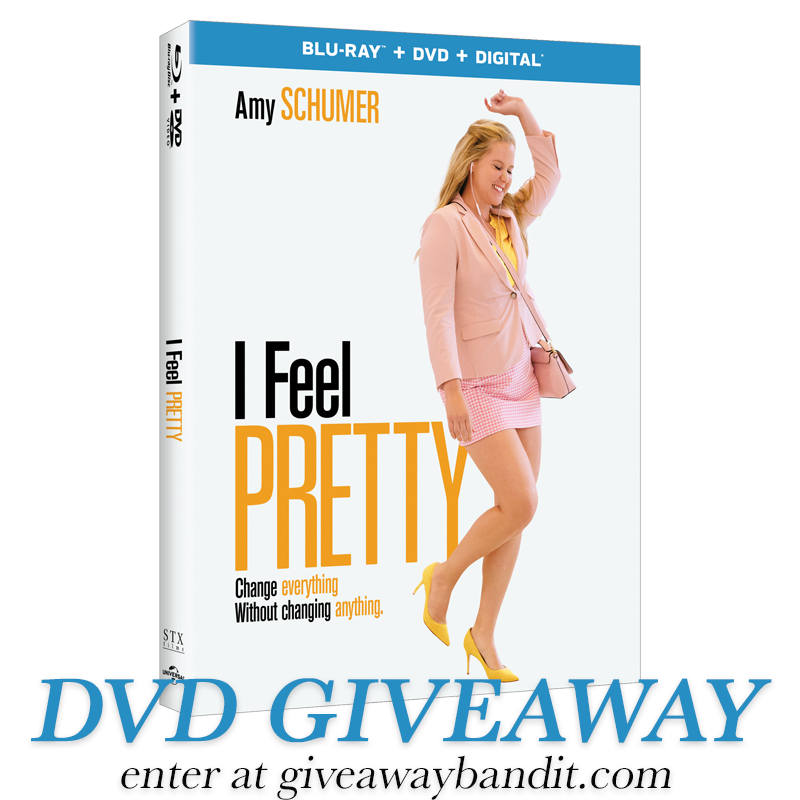 I Feel Pretty is now available on digital & Movies Anywhere now and on Blu-Ray™, DVD & On Demand July 17, 2018 from Universal Pictures Home Entertainment! Enter to win the I Feel Pretty DVD below!

Filled with an all-star comedic cast including Amy Schumer, Michelle Williams, Rory Scovel, Busy Philipps, Aidy Bryant,  Emily Ratajkowski and Naomi Campbell, the feel-good comedy I Feel Pretty arrives on Digital and Movies Anywhere on July 3, 2018 and on Blu-ray™, DVD and On Demand on July 17, 2018 from Universal Pictures Home Entertainment. The release comes packed with exciting bonus features including deleted scenes, a gag reel and special featurette that take fans further into the hilarious and moving story.

Renee’s life is changed forever when she accidentally slips and falls in the laugh-out-loud comedy, I Feel Pretty, arriving on Digital on July 3, 2018 and on Blu-rayTM, DVD and On Demand on July 17, 2018 from STXfilms and Universal Pictures Home Entertainment. Filled with heart and humor from beginning to end, I Feel Pretty on Blu-ray, DVD and Digital comes packed with exciting bonus features including deleted scenes, a gag reel and special featurette that take fans further into the hilarious and moving story.

Amy Schumer (Trainwreck, Snatched) stars as Renee, a woman who struggles with feelings of insecurity and inadequacy on a daily basis.  After suffering a fall she wakes up believing she is suddenly the most beautiful and capable woman on the planet. With this new found confidence she is empowered to live her life fearlessly and flawlessly, but what will happen when she realizes her appearance never changed?  Hailed by critics as “fiercely entertaining” (Dustin Putman, The Film File), I Feel Pretty is produced by McG (Charlie’s Angels, Terminator Salvation) and also stars an outstanding cast including Academy-Award® nominee Michelle Williams (Manchester By The Sea, The Greatest Showman), Rory Scovel (The House, “Those Who Can’t”), Busy Philipps (“Cougar Town,” He’s Just Not That Into You), Aidy Bryant (“Saturday Night Live,” “Girls”), Emily Ratajkowski (Gone Girl, We Are Your Friends), Naomi Campbell (Zoolander 2, “Empire”), Tom Hopper (“Game of Thrones,” “Black Sails”), Sasheer Zamata (“Saturday Night Live,” Sleight) and Lauren Hutton (“Nip/Tuck,” Once Bitten). BONUS FEATURES on BLU-RAYTM, DVD AND DIGITAL

I Feel Pretty will be available on Blu-ray™, DVD and Digital.

Check out the trailer below:

Disclosure: This giveaway is in no way associated with, sponsored, administered, or endorsed by Starbucks, Facebook, Twitter, Google, Pinterest or any other social media network. All opinions and experiences are The Bandit Lifestyle’s. Open to US & CAN , must be 18+. Confirmed Winner(s) will be contacted through email and have 48 hours to respond before a new winner will be drawn. No purchase necessary. Void where prohibited by law. The sponsor will be responsible for product fulfillment to winner(s) of the giveaway. The disclosure is done in accordance with the Federal Trade Commission 10 CFR, Part 255 Guides Concerning the use of Endorsements and Testimonials in Advertising. For questions or to see your product featured in an Event you can contact melanie (at) giveawaybandit (dot) com.