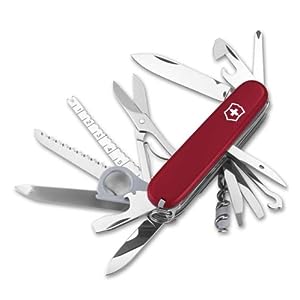 From the renowned company that created the Swiss Army Knife a century ago comes the Champion Plus, a complete set of tools for campers, hikers, hunters, fishers, picnic enthusiasts, and people all trades. The standard camping tools include a large blade, a small blade, a corkscrew, a can opener, a bottle opener, a small screwdriver, a large screwdriver, a Phillips screwdriver, scissors, tweezers, and a toothpick. Order now and Get 50% off Victorinox Swiss Army Champion Plus Pocket Knife