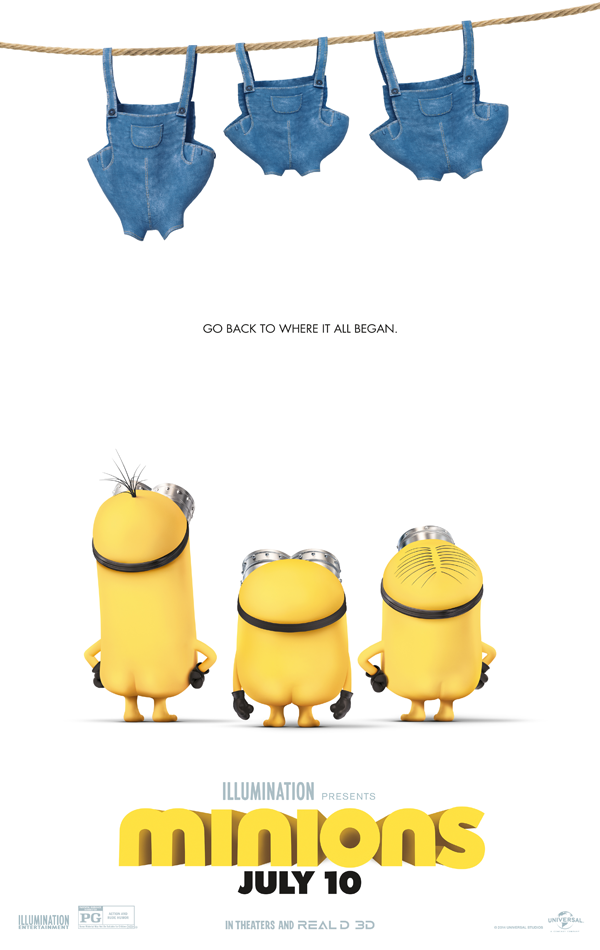 Let’s go back to where it all began with the Minions movie. If you are a huge Minions fan like we are then I am sure you’ve seen them in the popular movie Despicable Me. The new Minions movie, which hits theaters today, is all about life before they met their boss Gru (Steven Carell).

The story of the Minions begins at the dawn of time with them all having one common goal: to find a master. We watched as they went through several masters until one Minion, Kevin had a plan. Kevin alongside fellow Minions Stuart and sweet little Bob go on a quest to find a new evil boss for their Minion family. They quickly find themselves in 1960s New York City to what eventually leads them to their next potential master, Scarlet Overkill (Sandra Bullock).

Before meeting Scarlet Overkill the Minions hitch a ride with the Nelson family to Villain- Con where they’ll later meet Scarlet. I don’t want to give anything away about them but I did feel like the Nelson’s were not used enough in this movie. The Nelson family was absolutely hilarious! Their story line was amazing and the father, Mr. Nelson, was voiced by Michael Keaton. I wish they would have been in the movie longer.

Scarlet is the world’s first supervillainess. Scarlet is like a female James Bond but suitable for kids. She gives off some great adult humor too! I really enjoyed her and my son was laughing at a lot of her stunts. However, I found myself more fond of her husband, Herb (Jon Hamm). He was so fun and energetic to watch. Such a great role for Jon Hamm! Kevin, Herb and Bob are taken to England by Scarlet and Herb where they will help Scarlet take over the world and the crown of the Queen of England.

I think what makes this film even funnier is the gibberish the Minions speak. Even though you can’t understand what they are saying, you still seem to know what they are talking about. They are my absolute favorites characters in movies to date. I love them! They never get old!

You’ll have to head to theaters to see the dramatic and action packed ending to the Minions movie. It was our favorite part! It definitely started making me think there would be another Despicable Me coming soon! Plus, this movie has an amazing cast of voice-over stars!

Be sure to check out our Minions Party Favor Food Cups!